Neil deGrasse Tyson, whom I’ve previously shown to repeatedly distort the truth about van Gogh’s Starry Night, makes some very basic mistakes in astrophysics, in which he holds a Ph.D., while on Hot Ones. It’s not a new mistake for him either, but it suits his political goals.

The host, Sean Evans, is famous for his deep research to find obscure topics from his guests’ past. But this softball setup is not something obscure about Tyson:

Sean Evans: So now that you’ve eaten ten scorching hot chicken wings on YouTube with a bald guy I think this is now as good a time as any talk about how insignificant we all are.

Then he makes his science mistake, and it’s not just saying “atoms” when he means “elements”. His mistake jumped out to me because I spent quite a bit of time in graduate school thinking about element production in the universe. But a high school student interested in the same thing would know this. Or, maybe, the host of the “Unafraid of the Dark” Cosmos:

And then his logic mistake where he goes from that to a conclusion with no support:

Tyson is expressing a political opinion and bending the science to support it. It’s no secret that Neil deGrasse Tyson thinks he’s special and treats people poorly. Part of that game is that he has to make sure that other people don’t feel special, and he does that by shitting on them. Tyson is all about punching down.

If we aren’t special, why aren’t there more of us out there in the Universe?

The Drake Equation is a bar napkin estimate of how much intelligent life might be out there. It takes the probability of stars with planets, the probability that those planets are in the right orbit to support life, and so on, to estimate how close extraterrestrials might be and if they might communicate with us. Each estimate is a fraction, so the total probability gets very low quite fast.

We haven’t found any aliens.

But Tyson thinks that they may be avoiding us:

I wonder if, in fact, we have been observed by aliens and upon close examination of human conduct and human behavior they have concluded that there is no sign of intelligent life on Earth

This is a weird stance to take. It’s based on the idea that we are too stupid, but at the same time, that we are the most interesting thing going on in this planet. It’s utterly tragic that Tyson misses what fiction writers have said on the subject.

As aliens, if we’re stupid, that works out for them as colonizers.

Or, the aliens might come to eliminate us as the problem since we are not the interesting thing here:

This is a pretty important point: if we are not special, who cares, besides us, if we “destroy” the planet. Earth is going to be just fine, with or without us. The planet doesn’t care if we wreck the atmosphere so it cannot support life, whether by losing ozone, being too hot, whatever. The plants die, the animals die, and we all die. The planet doesn’t care. The planet will still be here and will just start over. We’d be a mere blip in the planet’s history. If it were an episode of Friends, it might be “The One With Humans”, just like there might be “The One with Dinosaurs” and “The One with Trees”.

Elements are rare, and so are atoms.

Tyson says the human body is mostly four different elements (although he says “atoms”, which is not quite right, but whatever). Humans are mostly Hydrogen, Oxygen, Carbon, and Nitrogen. Those are indeed the top elements in our bodies. He jumps to the conclusion that we are not special since those are most common elements in the Universe.

We aren’t even made from the most common stuff of the Universe. This is something that Tyson surely knows; he does have a Ph.D. in Astrophysics and he hosted a TV show about it. But, he’s not trying to educate us on Science, so facts and context are not important. We are made from the stuff that we can see and interact with, so he just ignores the rest of the Universe. That’s not all he’ll ignore though.

In that 4-5% of the mass of the universe, the four most abundant elements by mass are, in order, Hydrogen, Helium, Oxygen, and Carbon. Tyson omitted Helium on purpose because it’s inconvenient for his point. That’s why he has to add “chemically active”, since Helium is a noble gas and as such, chemically inert. Once he knocks out Helium, he can promote Nitrogen, the fifth most common element, into fourth place. But, Nitrogen is exceedingly rare in the Universe. It’s a stepping stone to Oxygen in solar production of the light elements.

Here’s a bar plot of their relative mass fraction. Hydrogen is about 74% of the baryonic mass, Hydrogen is about 24%, Oxygen is about 1%, and then you can barely note that anything else is there. Looking at this chart, the egregious omission of Helium is more apparent: 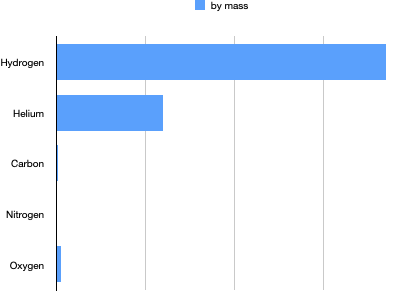 This looks even worse if you count atoms instead of weighing them. Since Carbon is about 12 times heavier than Hydrogen and Oxygen is about 16 times heavier, their fraction by mass gets a big boost. By count, they virtually disappear: 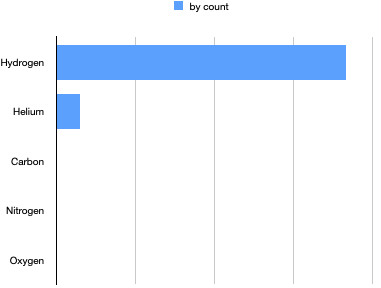 We are not made of the main elements of the Universe. We are made of the most abundant one, and then some minor ones. That looks even worse when we look at our bodies composition.

And, remember that all of this is just 4-5% of the Universe. That Oxygen bar that you can barely see is relative to just the baryonic count.

Oxygen is rare in the Universe. It’s rare in our solar system. Mercury might have water ice in its polar craters, and Venus has an atmosphere of carbon dioxide. Some of Jupiter’s and Saturn’s moons have Oxygen in their atmospheres, but those are barely atmospheres at all. Oxygen is just 1% of 5% of the Universe, so of course it’s not everywhere. What’s really interesting is that it becomes concentrated anywhere.

In 1998, NASA launched the Submillimeter Wave Astronomy Satellite to look for two oxygen spectral lines, a water spectral line, a carbon monoxide line, and a carbon line. They hoped to find Oxygen in interstellar clouds. They did not find it. The 2001 Odin project also failed to find it. Oxygen is rare in the Universe. And, many of these experiments are looking specifically for elemental (neutral) Oxygen.

And, by mass, Carbon is half as plentiful as Oxygen, while Nitrogen is a tenth as plentiful. That they are ranked a couple places from Hydrogen doesn’t make them plentiful. It’s a bit of misdirection to explain anything that way.

Hans Bethe, one of the giants of Physics, was awarded the 1967 Nobel Prize for his 1939 paper, “Energy Production in Stars” in Physical Review. It’s a paper I had photocopied and kept in the binder of papers I read often. It set out how stars started with Hydrogen to make Helium, then Lithium, Beryllium, Carbon and so on.

Our Sun is a main sequence star that’s mostly making Helium out of four Hydrogens in the “PP chain”. Slightly bigger stars with higher pressures and higher temperatures make Oxygen in several steps by fusing Hydrogens to isotopes of Carbon and Nitrogen in the “CNO cycle”.

Curiously, Bethe thought that the CNO cycle, which would make Oxygen, was the major energy producer in our Sun. It’s turns out its not. Our Sun is not making Oxygen in any appreciable amount because our Sun is just a tad too small to have the pressure and temperature required for that.

Other stars are making Oxygen, and that stellar Oxygen sits inside those stars until they runs out of fuel and can no longer fight gravity. After that, the stars collapse on themselves then explode, sending their contents out into space as the dust that makes nebulas.

That dust can then accrete again to make new stars, perhaps with dust from other exploded stars. The cycle starts again. Eventually you get stars large enough to make Oxygen. For all the billions of years the Universe has existed, we’ve only worked our way up to 1% Oxygen in baryonic mass.

Tyson listed the four elements in order of decreasing mass fraction, while skipping Helium. By mass in the Universe, it’s Hydrogen, Oxygen, Carbon, and Nitrogen. It’s mostly Hydrogen, and trace amounts of everything else.

In our bodies it’s a bit different. We’re about 65-70% water, and water is two parts Hydrogen and 16 parts Oxygen by mass. Every water molecule gives Oxygen an eightfold advantage by mass, and there’s a hell of a lot of water.

Our body’s composition argues against Tyson’s point that we are not special. If we were the same mass fractions as the universe, he might have a point, but we have inverted the proportions. We have specifically excluded Hydrogen as the most important element and built ourselves around an element that’s 1% of 5% of the Universe.

All of this happens against the Second Law of Thermodynamics. We have specifically decreased local entropy by organizing rare elements far beyond their natural abundances. This doesn’t even consider that we can’t do without heavier elements such as Phosphorous, Potassium, and Sodium. If we don’t have those, our bodies don’t work. That’s the entire point of Gatorade.

Tyson forecloses all of these questions, though, because we’re nothing special to him. There’s nothing to wonder about and no interesting questions to ask. A scientist is the person who wonders “How did it get this way?”. Tyson is actively arguing against wonder.

If aliens showed up, and he’s often said he hopes aliens exist, would they be special? If they are, why aren’t we? And if they aren’t, is nothing special?

But, Tyson is also anti-philosophy, seemingly from a mistaken, utilitarianist perspective. He simply thinks it’s a waste of time because it doesn’t “advance” science. But, he’s always seemed to be a backward, Victorian-era thinker to me; less scientist and more cataloger and collector. He doesn’t need to think about what he is doing because it’s just work. That Philosophy doesn’t get through Science’s to-do list is its chief failing to him.

But the philosopher might quip that Philosophy doesn’t score touchdowns, and neither does Science. I think that might be lost on Tyson, but who better than a philosopher to think about what “special” or “advance” means, their relationship to what we are doing, and what we should do about it?

To summarize, here’s the rundown of just how rare we are, elementally:

That Oxygen would get together to do that seems very unlikely, and we don’t have any proof that it has happened anywhere else. Still, that’s not special enough for Tyson. Worse than that, he doesn’t think it should be special to you.

Maybe we need a different role model for scientists, perhaps one with a bit more gumption. They don’t even have to be real. Or maybe we just need to abandon Tyson on Mars.