After a baking disaster, I decided to calibrate my oven. When the dial says 375, what is the actual temperature? This oven is a fairly new, so I don’t have a feeling about what it’s doing like I had with the previous one. I suspect this oven is about 50 F too low.

I have a cheap dial thermometer from Taylor which I keep in the oven. I figure that’s not very accurate, but I did specifically buy it based on its brand.

I mostly use a Govee grill meat thermometer, which I like for its simplicity. I turn it on and it tells I the temp.

Lastly, I use the Yacumama Digital Oven Thermometer, which I don’t particularly like.

On the first go I just hung the probes from the oven rack, but the results were weird. one of the probes had shifted to touch the rack below and the side of the oven.

I constructed a holder from some spare silicon to hold the probes away from everything. 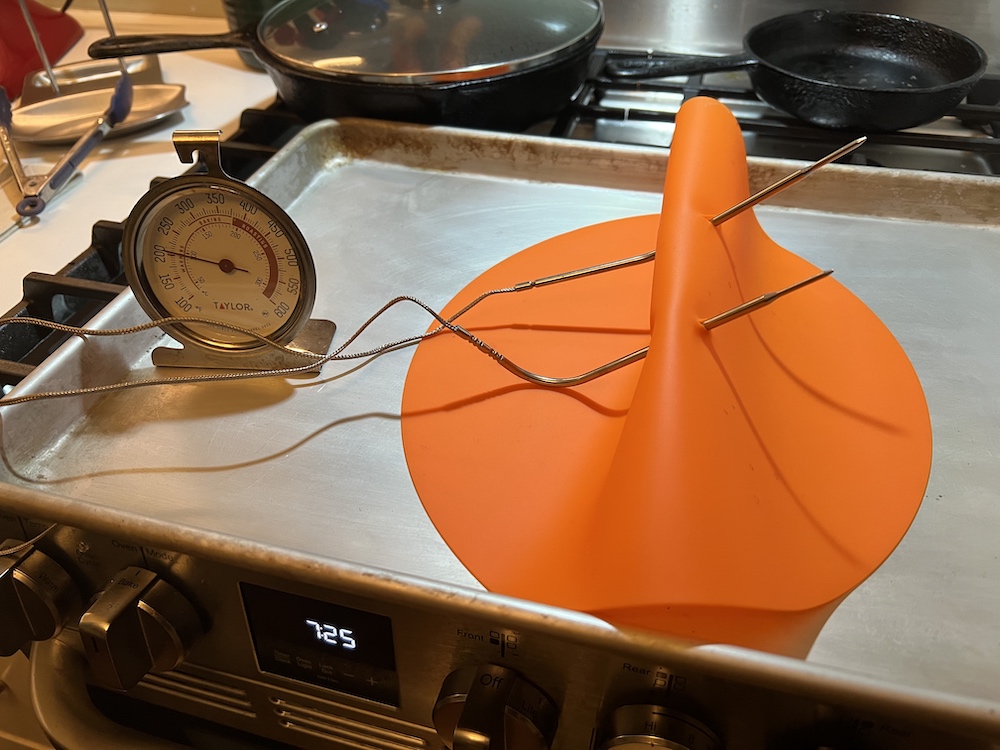 None of these have been calibrated at high temps. I don’t even know how I’d do that; would I use boiling glycerin (554 F)? Now I wonder if my rangetop could boil glycerin. I don’t think I’ve even done that in a working wet lab.

And, as always, remember what my Analytical Chemistry professor told our class: these thermometers were bought from the lowest bidder. As part of that, we usually had at least thermometers involved in any experiment.

I think I’m right. My oven dial is 50 F off. The Govee and the Taylor largely agree. The Taylor takes a long time to respond, but once it does, it’s steady.

The Yacumama agrees with the other two until it doesn’t. That doesn’t make it a bad thermometer. As a meat thermometer, it really needs to be accurate to about 175 F. After that most people don’t care.

My oven’s maximum temp is about 400 F. This is a problem for some bread recipes which want 500 F at the beginning and 450 after that.

I haven’t bothered to adjust the temperature knob to realign it. Maybe that’s a solution.