There’s a particular government service I need to interact with and they have rebuffed my messaging through their official website. I’m supposed to call them, but everyone else is calling them too. Instead of a callback service or something similar, this government office makes you walk through a two minute phone tree where several messages (all completely irrelevant to me) cannot be bypassed. After two and a half minutes, it tells you that no agents are available and to call back later.

First, the trick is to figure out how to walk the automated menu and how to send the right tones at the right time. That’s just trial and error. You can dial more than the number, so I can add a bunch of stuff after the number to pretend to be me selecting things in the menus. A comma is a pause for about two seconds:

That works, although it took me about 20 calls to get the right intervals. That long pause between 1 (“for English”) and 9 (“all other inquiries”) simulates me listening to a long message that has nothing to do with the any of the reasons I’d call. If this were the water company, that message would be a mini-lecture on whales since they happen to live in water.

I put that number in Contacts so I can access it in the iPhone phone app. I call it, the other side answers, and the pauses and keypresses happen for me. I get to where I expect to be, which is the message telling me to call back later. I don’t need to interact with it other than to initiate the process. I got this down to 1’20”.

Using this on my phone is a bit tedious. I can almost do the same from the terminal with the tel:// scheme. This opens the number in Handoff:

I get a notification with a “Call” button, which is still annoying: because I have to interact with something after I start the process:

But, I can control the UI with AppleScript to press buttons for me. I found an example on Apple StackExchange’s Auto FaceTime call using AppleScript, without confirm . I wasn’t motivated enough to take values from arguments or other settings because I’m using this for a simple purpose. I’ll just hardcode those values:

I can run that right from Script Editor. It runs the program, clicks the button, and my iPhone does the rest: 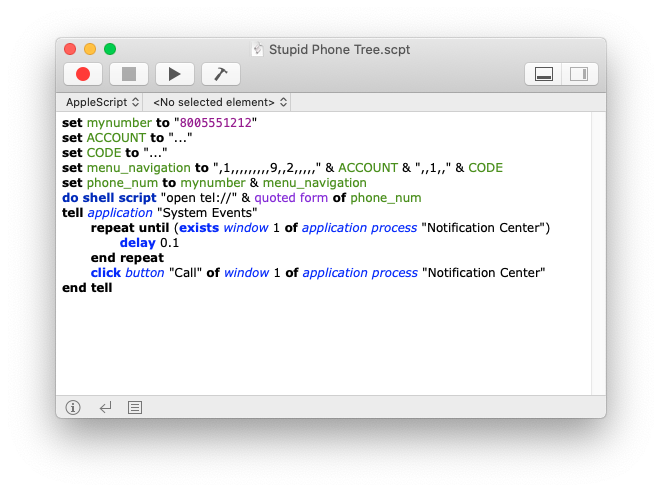 But I can also export this as an Application. Now I have a clicky thing on my Desktop. I open that and it all happens. I have to give it permission to use Accessibility (in Preferences / Security & Privacy) and AppleEvents (allow in the dialog). I can also open it from the terminal:

But that’s not enough. I still need to pay attention to that because I have to initiate each call. All that’s going to happen is that the remote side goes through the process and hangs up on me. I want it to try again. And again, and so on. Eventually I think I might get a person and it won’t hang up on me. No problem: I’ll automate that part too by opening that application periodically:

But, eventually a human picks up and I’ll fumble getting to my phone. Luckily I have a program to automate trying again.

The next day, the phone menu had changed to add another unskippable message, so I had to add five more commas after the 1 option:

I let this script run for a couple hours and finally got to an agent, but an agent who couldn’t see what was wrong with my account until I offered a likely explanation. In that case, it was apparent to him, but he couldn’t deal with that so I was transferred to a specialist. But, I wasn’t really transferred. Rather, I was put into the hold queue for “between 120 and 127 minutes”.

After 10 minutes, the automated service gave me the option to get a call back rather than wait. But wait! I had to “press 1” to confirm my number. The touchpad on the FaceTime notification lets me click the number on the mouse, but it sends a very short tone that the system would not pick up on. I tried this several times as it cycled me through the phone tree after it “couldn’t understand my response”. 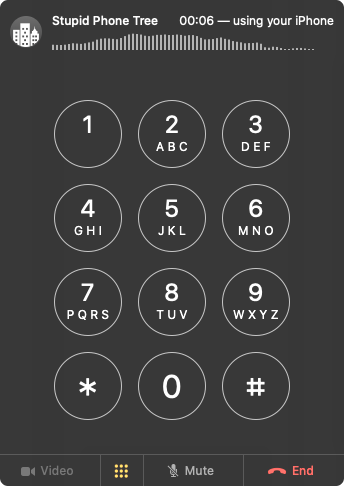 However, I wondered if I could type the 1 on my keyboard. That worked where clicking on the keypad didn’t. It worked for the next keypress too.